Which Supplements are Worthwhile? (7 I Use, & Why) 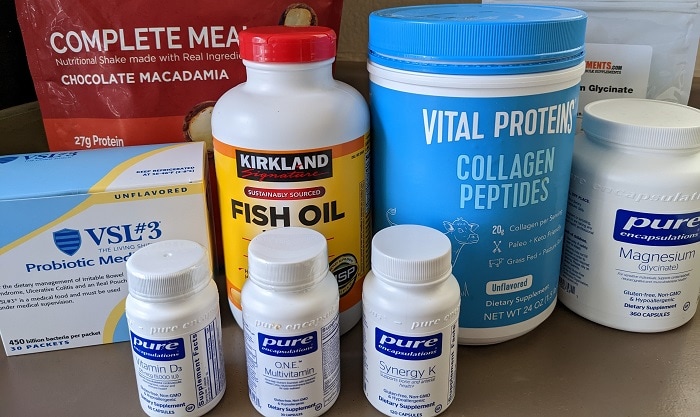 I think most supplements are overrated. It’s a lucrative industry, with poor quality control. And naturally they want to make money off you.

If you’re not careful, you can get supplements that do more harm than good (due to dangerous contaminants such as mercury or lead, for example).

Overall, I think you’re better off focusing on “food as medicine”. And you can get most of the nutrients you need from the food you eat.

All that being said, here are a few supplements that I do use, and a brief explanation about the benefits of each one.

I’ve developed this list based on years of research/study + personal experience, so hopefully it’ll save you some time on your health journey. 🙂

If you’d like more context, I went into more detail about these supplements (and the supplement industry) in episode 37 of my podcast.

I also recorded a video on the same topic, though it’s a bit shorter. I’ll add it here once I publish it on YouTube.

Supplements I Use, and Why

Now, let’s go ahead and get into the list.

Hopefully it goes without saying that which supplements you should use depends on your own individual circumstances. So don’t forget to consult with your own medical providers. 🙂

I’ve noticed a lot of people are deficient in vitamin D. And it seems to be a bad sign for your health if your vitamin D levels are low.

(The nice thing about fat soluble vitamins such as vitamin D is that you don’t really have to take them every single day, because your body can store them.)

The product I’m currently using is from Pure Encapsulations (a good brand):

Most people know about vitamin K1, which is involved in blood clotting.

Lesser-known is vitamin K2, which helps your body put calcium in the right places (i.e. not in your arteries). So it’s a nice compliment to vitamin D (which helps you absorb more calcium, and hold on to it).

We don’t get much vitamin K2 in our American diet, so I take a supplement called Synergy K. (It includes two different types of vitamin K2, as well as some vitamin D.)

I typically take it about every other day.

In general, you want your omega-3 to omega-6 ratio to be pretty high. Because omega-3 fatty acids are anti-inflammatory, and reduce your tendency towards clotting.

Our modern diets are pretty bad about this, because we consume so much “vegetable” oil, which has predominantly omega-6 fatty acids.

I regularly eat sardines, which are a good source of omega-3s. But when I’m not eating fish, I take a fish oil supplement to boost my omega-3s.

I previously used a fish oil supplement from Nordic Naturals:

Most recently, I’ve been using a fish oil supplement from the Kirkland / Costco brand (because I checked it on Consumer Labs, and it had good quality without significant contaminants).

I heard it estimated that about 70% of Americans are deficient in magnesium.

Magnesium does a lot of important things in our bodies, including DNA repair (which helps prevent cancer). And getting enough magnesium seems to be helpful for mood / mental health, heart health, and many other things.

The RDA is around 400 mg, but in some cases a higher dose may be beneficial.

Be careful if you take it by mouth–it can cause loose stools.

That’s why I prefer magnesium “glycinate” and magnesium “bisglycinate”–because they don’t seem to cause as much diarrhea as other forms.

Currently I’m using two different products, one from Pure Encapsulations and one from Bulk Supplements.

(Fair warning: magnesium powder doesn’t taste good! So you just drink it quickly. Or get the capsules.)

FYI, another way to boost your magnesium level is to take an Epsom salt bath–some of the magnesium gets absorbed through your skin.  I also do this on a regular basis (and usually feel very relaxed afterwards).

If you’ve ever taken antibiotics in your life, you’d probably benefit from using a good quality probiotic.

That’s because antibiotics kill a lot of the good bacteria in our gut (called the “gut microbiome”, or “gut flora”). Emerging research suggests gut bacteria can play an important role in mental health, metabolic health, and much more.

Most probiotics are not good quality. For example, if it’s sitting on the shelf at your pharmacy most of the bacteria is probably already dead.

That’s why I use a probiotic called VSL #3.

It has a bit more research to back it up, and has a large quantity of good bacteria.

I try to use one of the sachets every week or every few weeks–it’s kind of pricey so I space it out a bit.

(There’s also a capsule form here–it’s cheaper but it has fewer bacteria also.)

Collagen is a type of protein that can potentially get incorporated into your cartilage and other joint tissues. So basically, it’s probably good for joints.

I’ve previously used a collagen supplement from Great Lakes (which seems to be good quality):

And more recently I’ve been using Vital Proteins (which is also available at Costco, and tested well on a Consumer Labs report that I looked at.)

Multivitamins are a good idea in theory, but sometimes you can get too much of a seemingly good thing.

For example, it’s not necessarily good to get a lot of preformed vitamin A (called “retinol”), or to consume just one type of vitamin E.

My personal approach is to take a multivitamin, as sort of an “insurance policy”–to make sure I’m not totally deficient in any major vitamins or minerals. But instead of taking it every day, I do 2-3 times a week (in hopes of avoiding excesses).

For the last couple years, my multivitamin of choice has been “One Multivitamin”, from Pure Encapsulations.

I don’t use meal replacement shakes all the time, and I don’t think you should either.

But sometimes in a pinch, I use HLTH Code complete meal shakes.

They were formulated by Dr. Ben Bikman (from episode 18 of my podcast), and they have a lot of good quality protein, a blend of healthy fats, and low net carbs.

Feel free to try them out.

As a bonus, you can get 15% off with the code “FASTINGWELL”.

Supplements are mostly overrated, but at least a few appear worthwhile–especially if it’s something you’re likely to be deficient in.

Quality control is important–so make sure you’re getting your supplements from a reputable brand (or a product that has been third-party tested).

Overall, I think you’re better off mainly focusing on the quality of food you eat. Because nutrients often work better when you get them from real food (as opposed to a pill).

If you do decide to get any supplements, you may want to consider some of the ones in my curated list above, which I’ve developed over several years of study and experience.