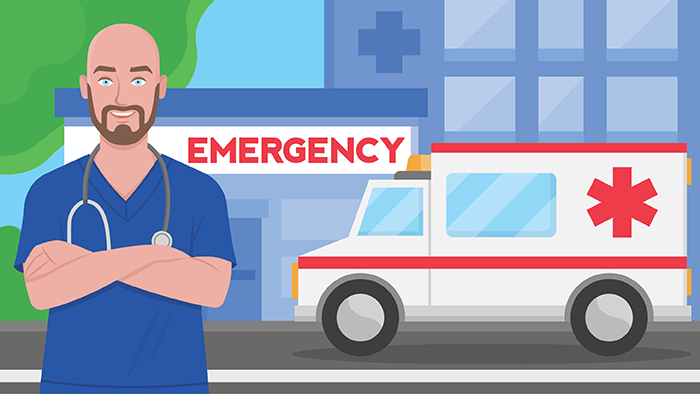 At first, I was hesitant to try fasting at work.

Later, I did some “intermittent” fasting at work, which turned out to be pretty easy.

Eventually, I tried doing some prolonged fasting while working as well.

Once I figured out how to do it, it was easier than expected, and had some unforeseen benefits.

Today I’ll share my experience, and some of the  benefits I’ve found from fasting while working in the emergency room.

I’ll also share some tips and tricks in case you want to try fasting at work yourself.

I Was Originally Hesitant to Try Fasting at Work

When I first started fasting, I wasn’t sure how my body would react.  So I mostly did it in a “controlled environment”, at home.

However, I quickly realized that intermittent fasting at work was not that big of a deal.  Basically all I had to do was delay (or skip) one meal.

When it came to prolonged fasting, I was more hesitant, because I thought I might feel fatigued or have trouble focusing.

For instance, the first time I ever did a multi-day fast (5 days), I felt kind of low on energy, and had a little trouble remembering things here and there.  Obviously I didn’t want that to happen while working in the ER.

Months later, I realized my body and mind just needed some time to adapt.  Extended fasting got a lot easier, and I even noticed some significant advantages–more on that below.

Intermittent Fasting While Working in the ER

From almost the beginning, intermittent fasting (IF) was actually pretty easy to do at work.

The first version I ever tried was the 5:2 diet, where I would limit myself to about 500 calories 2 days per week.  I remember doing the low-calorie days at the urgent care where I used to work part-time.  Basically I just ate a few spoonfuls of peanut butter during my shift, and a salad in the evening.  It felt a little funny, but it wasn’t terribly difficult.

Later I moved on to more typical time-restricted eating, usually something close to 16/8.

Basically, I would eat one meal during my shift, and one meal either before or after the shift–depending on what time of day I was working.

Overall, I found eating just two meals a LOT more convenient than trying to squeeze in a bunch of meals and snacks.  We’re usually really busy in the ER, and there’s barely time to get food anyway.

Examples of IF in the ER

When you do shift work, the schedule can be a little convoluted. So sorry if this is confusing.

Here are 3 scenarios, depending on what shift I was working:

When I worked the day shift (about 8am-6pm) I could just skip breakfast, take a break in the middle of my shift to get lunch, and then eat dinner after work.

If I worked a swing shift (about noon-10pm), I would just eat a big lunch right before I started, and then eat one more time around the midpoint of my shift.

At one point, I worked the night shift (~8pm-6am) for a year straight.  Typically I’d have dinner right before work, and then eat one more time in the middle of the shift (maybe around 3am).

Regardless of the type of shift, the end result was generally eating two hearty meals per day, during roughly an 8 hour “eating window”, give or take.

If you work a more traditional 9 to 5 job, you could do something similar by just delaying (or skipping) breakfast.  For instance, maybe eat breakfast at 10am instead of 7am for a while, and eventually try skipping it altogether.

Extended Fasting While Working in the ER

As I mentioned above, I was originally hesitant to try any prolonged fasting at work.

That’s because when I first started doing longer fasts, my mental and physical energy levels fluctuated somewhat, and I didn’t want to have a significant energy lull while I was at work.

It took a while (several months), but eventually my body and mind got more adapted. I also learned some helpful “tricks” along the way.

Overall, fasting got quite a bit easier, and I was confident enough to do longer fasts at work.

In the next couple sections I’ll cover some benefits of extended fasting at work, followed by tips and tricks that’ll help you be successful if you wanna try it.

Benefits of Prolonged Fasting in the ER

It may sound a little daunting at first, but there are actually several advantages to doing a prolonged fast while you’re working.

Some days, we’re busy enough in the ER that there’s basically no time to eat.

Sure, you can go grab a quick snack from the physician lounge, but most of what they have in there is junk food anyway.  So it’s not ideal.

That’s why when I’m fasting during a busy shift, it’s a lot more convenient!

Overall, I’m really grateful that I can ignore food and just focus on getting things done instead.

On a related note, fasting itself is actually easier at work, because I’m busy and distracted.

There’s no time to think about hunger!

Nowadays, I actually prefer fasting at work versus fasting at home.  The time goes by super quick, and I don’t sit around wondering if I should snack on something.

You know that sluggish feeling you get after Thanksgiving dinner?  Basically fasting does the opposite of that.

Not at first, but once you get used to it. 🙂

After a while, your brain adapts to using ketones as its main energy source, and it actually gets significantly easier to focus.

That can be really helpful when I’m juggling several patients and trying to keep track of everything else that’s going on in the ER!

Not only do ketones make it easier to focus, they also impart a general feeling of calmness and well-being.

Working in the ER can be stressful, sometimes a major drain.

But when I’m fasting, I tend to feel more optimistic and relaxed.  So it makes my job seem less stressful.

3 Keys to Success When Doing Extended Fasting at Work

If you’re interested in trying a longer fast at work, here are 3 things I’ve found essential for success.

It wasn’t until after about a year of various experiences with fasting that I felt comfortable doing a prolonged fast at work.

So take it slow.

Basically, your body needs some time to get “fat adapted”.  In other words, as time goes on you’ll become more efficient at using fat and ketones as your primary energy source.  That transition happens gradually, over a period of months.

Don’t try doing a multi-day fast at work until you have a substantial amount of experience.

Key #2 – Get your Ketones Up in Advance

Your brain needs ketones during a long fast. But it takes about 3 days for your ketones levels to really ramp up, once you start fasting.  As a result, you may have some trouble focusing or feel low on energy during the first couple days.

Eat a ketogenic diet (high fat, low carb) so your body can switch over to fat metabolism in advance. That way, your brain has ketones available from the get-go.

Your ketone levels will go even higher once you’ve been fasting a couple days, but it helps to get a head start!

You can also bridge the gap during the early stages of fasting by using “training wheels” — simple low-calorie foods that don’t really disrupt your fast.

For example, sometimes I brought a bag of olives to work if I wanted to fast, but knew I wasn’t in ketosis yet.

That works pretty well.  But getting your ketones up beforehand is even better!

Key #3 – Get Your Salt (and Other Electrolytes)

Prolonged fasting is LOT easier if you get enough salt.

Salt maintains your blood pressure, and helps keep your energy up.  It also helps you avoid feeling dizzy, or having similar symptoms.

It’s hard for me to go TOO high with salt, because I’ll just pee out the excess.  And salt is so critical to my well-being that I tend to err on the side of more rather than less.

When I do prolonged fasts in the ER, I often bring a “special” drink along that’s a mixture of soy sauce, vegetable broth, and water, sometimes with a splash of MCT oil.

Soy sauce and vegetable broth are both super high in sodium / salt (and low in calories), so they’re kind of a perfect thing to drink when fasting.  As a bonus, the MCT oil boosts my ketones a little bit.

It’s also helpful to get some extra potassium and magnesium while you fast.  But sodium is WAY more important, so I’d mainly focus on salt.

What If You Work a Physical Job?

Working in the ER can be kind of a physical job, depending on the day. But not as much as manual labor and stuff like that.

I think if you work a truly physical job, you just need to ease into it more slowly.  And it’ll be extra important to stay hydrated and get enough salt and other electrolytes.

Start by experimenting with some shorter-term fasting, see how you do.

There’s no rush, but with the other tips above you may feel comfortable enough to try some extended fasting eventually.

Fasting while working in the ER took some time to get used to, but overall it’s been easier than expected, and really beneficial.

Among the benefits: It saves me time, helps me focus, and calms my mood.

Don’t try doing a prolonged fast at work until you have plenty of experience, and your body is “fat adapted”.

When you’re ready, extended fasting at work can be a really valuable tool. Especially if your work keeps you super busy, like mine does.

Start slowly, boost your ketones in advance (or use training wheels), and make sure you get enough salt and other electrolytes!

If you do that, you’ll probably find fasting at work relatively easy, super convenient, and more beneficial than you expected. 🙂