Does Sucralose Break a Fast? [The Full Story, Backed by Science] 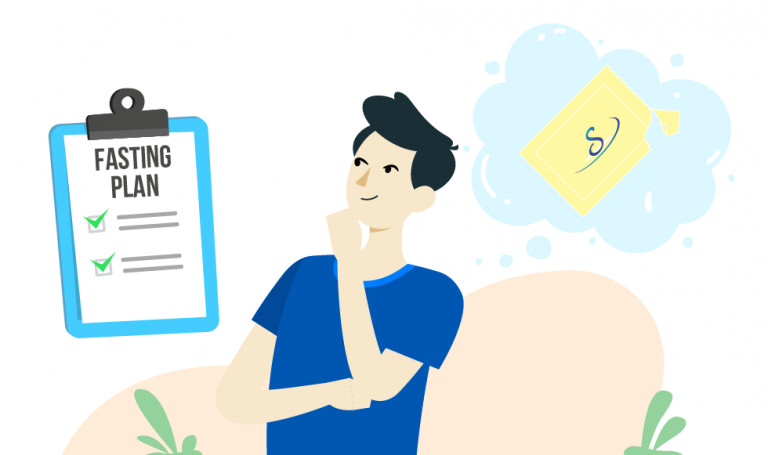 Sucralose (brand name Splenda) is the most popular artificial sweetener in the United States.

Sucralose / Splenda says it has zero calories, so it makes sense you’d want to use it while fasting.

But does sucralose break a fast?

After researching this topic, here’s my take:

You may do okay fasting with sucralose in the short-term, but in the long run it will be harder to reach your fasting goals.

Sucralose is most often sold in small powder packets, which claim to have zero calories.

While sucralose itself has no calories, it’s typically mixed with dextrose (another name for glucose, a type of sugar) and maltodextrin (a carbohydrate).

Splenda packets actually contain about 2-4 calories (foods with fewer than 5 calories per serving are allowed to list their calories as “zero” in the US).

So, when you dump a Splenda packet into your coffee or tea, you’re not only getting sucralose (which has some questionable health effects on its own–see below), you’re also getting some extra sugar and other carbs.

So that’s what is “in” sucralose–or at least in the powder packets.

Now, how will sucralose affect you while fasting?

Will Sucralose / Splenda Break a Fast?

Some common reasons to fast include:

Here’s how I look at it:

If something stops you from reaching your fasting goals, then it “breaks” your fast.

Let’s look at these common fasting goals in more detail, and how each one would be affected by sucralose.

When you fast, no food energy is coming in so you start burning body fat for energy. That’s why fasting is a great way to burn fat.

Will sucralose interfere with fat loss when you’re fasting?

It’s hard to say for sure–I don’t think that exact question has ever been researched.

On the other hand, there is some evidence that sucralose leads to weight gain and other metabolic issues over time.

This may be because people tend to feel less satisfied after consuming artificial sweeteners, and may end up eating more in the long run as a result.

It might work okay in the short-term, but I wouldn’t recommend using sucralose while you fast if your main goal is to reduce body fat.

Blood sugar (glucose) tends to go down when you fast because you’re not consuming any sugar or other carbs.

That’s why fasting is particularly beneficial for people with diabetes (or prediabetes), whose blood sugar levels tend to be excessively high.

Will sucralose raise your blood sugar while fasting?

Again, I don’t believe this exact question has been researched, but there is some related info we can look at.

In a 2017 study, healthy volunteers took sucralose over a period of several weeks, and their blood sugar didn’t get significantly higher.

But that’s not the whole story.

A 2014 study (in rats) showed sucralose and other artificial sweeteners alter gut bacteria, leading (indirectly) to glucose “intolerance” (which means their bodies couldn’t clear sugar from the bloodstream as efficiently).

It’s probably not a good idea to eat sugar when you’re fasting if your main goal is to lower blood sugar. 🙂

The hormone called insulin promotes energy storage in your body.

Insulin goes up when you eat carbs (so you can store the carbs as sugar or fat), and it goes down when you don’t eat carbs (so the energy stored in your body can be released).

People with (type 2) diabetes or prediabetes tend to have abnormally high insulin levels, and fasting helps bring their insulin down to normal.

I don’t think there’s any research about the effects of sucralose on insulin while fasting.

The 2017 study cited above and this 2009 study both suggest sucralose does not directly affect insulin levels.

However, multiple recent human studies (here, here, and here) suggest that sucralose makes you less sensitive to insulin with consistent use.

What does this mean?

If you become resistant to insulin, that means it doesn’t work as well in your body, and your body has to make more of it to try to get the job done.

It also means your blood sugar will go up over time, because insulin is struggling to move sugar into your cells (and out of the bloodstream).

I would not recommend using sucralose if you’re fasting to lower insulin (or blood sugar) levels, as it will most likely backfire in the long run.

Does Sucralose Break Ketosis While Fasting?

Ketones are an energy source that your body makes from fat when you’re not eating carbs–kind of a replacement for sugar.

When you fast, you’re obviously not (or shouldn’t be) eating a lot of carbs, so your ketone levels go up.

As far as I know, there’s not any research about sucralose affecting ketone levels.

My personal experience suggests it doesn’t have much of an effect (at least not in the short-term).

For example, on various occasions I’ve consumed sucralose-sweetened products while fasting, and they didn’t seem to have much effect on my ketone levels.

Sucralose appears to be okay while fasting if your main goal is to boost ketone levels.

Sucralose, and Fasting to Control Hunger

This may be the most important question of all:

Will sucralose make it harder for you to fast?

In general, fasting helps control hunger (maybe not on day one, but gradually over time).

This is partly because your body has a steady supply of fat and ketones for energy, without any wild swings in your blood sugar levels.

Some people feel hungrier when they use sucralose (or other artificial sweeteners), so it’s harder for them to keep fasting.

This is supported by clinical experience as well as research.

For example, in a recent study artificial sweeteners seemed to increase cravings for sweets.

That’s not something you want when you’re fasting.

My personal experience has led me to similar conclusions.

For example, a couple months ago I drank multiple cans of diet soda each day during a 4-day fast (I was trying to use it all up before quitting artificial sweeteners…sometimes I’m a little crazy like that).

While I still got through the fast, I definitely noticed a difference–I felt hungrier than usual, and my energy levels seemed lower compared to a typical extended fast.

(I realize most diet soda is made with aspartame, but some has sucralose, and I’ve had similar experiences with sucralose-sweetened products in the past as well.)

Sucralose may make you feel hungrier while fasting, so be cautious, and try to avoid it if you can.

What Else Should I Know About Sucralose?

Let’s run through a few other common issues or questions that come up.

Is sucralose the best sweetener to use while fasting?

It appears to have a variety of harmful effects, and may make it harder for you to fast.

I also wouldn’t recommend aspartame (the most common artificial sweetener in diet soda, energy drinks, and chewing gum), because it appears to be similarly harmful to health.

My top pick with what I know right now would probably be stevia.

Monk fruit is another “natural” sweetener that seems fairly healthy as well, but I need to do more research before I decide for sure.

More to come on this, as well as some of the other sugar substitutes (like erythritol), after a little more investigation.

Other Names for Sucralose

Splenda is by far the best known product name with sucralose.

One other is Canderel Yellow (original Canderel is made from aspartame and does not contain sucralose).

I’m sure there are some other combo products out there with sucralose, so keep an eye on the actual ingredients in any sweeteners you buy.

Sucralose and the Gut Microbiome

This has been shown in animal studies, including the rat study cited above, and others.

It may also be why sucralose appears to cause insulin resistance and long-term weight gain, as mentioned above.

While these effects haven’t been thoroughly studied in humans, they’re definitely a cause for concern.

There is increasing evidence that the makeup of our intestinal bacteria influences metabolism and many diseases, including diabetes, obesity, cancer, and even mental illness.

(If you want to learn more about the gut microbiome, here’s a fascinating podcast episode you can check out.)

How can you actually use this?

Basically, don’t jack up your microbiome. 🙂

Do your best to avoid substances that can be harmful to your intestinal bacteria, such as artificial sweeteners…or a more obvious example, antibiotics.

I’m not perfect about this either, but it’s a good concept to at least be aware of.

On a recent podcast episode I learned that artificial sweeteners also get into breast milk.

And that’s not all.

Kids are significantly more likely to become obese if their moms consume artificial sweeteners while pregnant or breastfeeding.

By the way, the podcast guest was Michael Goran, PhD, an expert in childhood obesity and diabetes.

He’s also the author of a new book called Sugarproof , which looks like a great resource for anyone who doesn’t want their kids to get addicted to sugar or other sweeteners (hopefully that’s everyone). 🙂

Sucralose is a bit more heat stable than other artificial sweeteners, so some people like to use it in baking or other cooking.

However, some newer research suggests heating sucralose above about 246℉ produces toxic chemicals.

As a result, I would not recommend cooking with sucralose (or any artificial sweeteners, really).

If you’re a fan of bulleted lists, check out this one that summarizes the Splenda / sucralose side effects we have evidence for:

I can’t emphasize this enough:

You may be able to get away with consuming sucralose while you fast, but it’s probably not good for your health, and you’ll be less likely to achieve your fasting goals in the long run.

Not only does Splenda appear to cause insulin resistance and long-term weight gain, it’s probably also bad for your gut bacteria (which can cause a lot of indirect health effects).

It also makes some people hungrier, which means it will be harder to fast.

So while you can have artificial sweeteners while you fast, I don’t think it’s a good idea.

What should you use instead?

If you want a sweetener, stevia may be a better option (as mentioned above).

For other fasting supplements, there are plenty you can choose from.

For example, apple cider vinegar and lemon water are typically okay in moderation, and boullion is a great way to keep your salt levels up.

So does Splenda break a fast?

Maybe, maybe not. But either way, it’s not good for you.

And don’t forget – the more you fast, the more your body will adapt, and eventually you may not crave sweeteners at all.