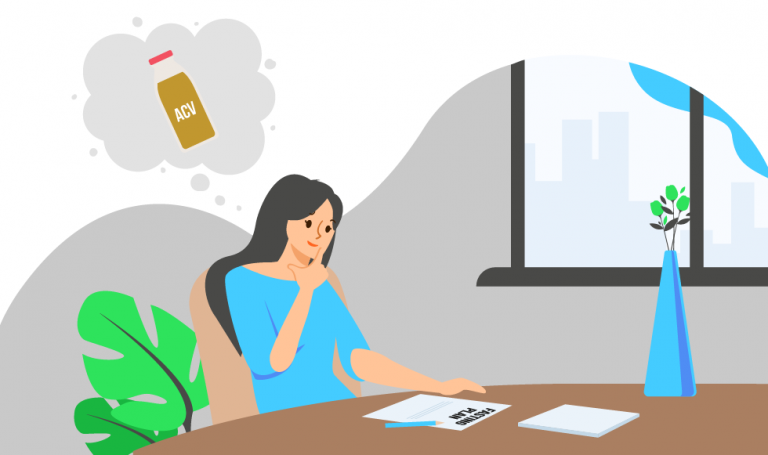 Apple cider vinegar (ACV) has almost no calories and may have some significant health benefits, which makes it a logical supplement to use during fasting.

But does apple cider vinegar “break” a fast?

The short answer is no.  For most people in most situations, apple cider vinegar will not break your fast, and it’s probably worth using if it helps you get through the fast.

On the other hand, you may not get all of the benefits of fasting if you take a supplement like ACV.

Whether apple cider vinegar will break your fast depends on your fasting goals, and the type of fasting you’re doing.

Keep reading and I’ll show you exactly when ACV is OK (or not OK) during a fast, including specific examples from my own experience.

Does Apple Cider Vinegar Have Any Health Benefits?

Apple cider vinegar may have a lot of health benefits…but it hasn’t been studied much in humans.

On the other hand, there’s a lot of evidence that other types of vinegar are beneficial.

We can’t say for sure if ACV provides the same benefits as the vinegar used in these studies, but there’s a good chance that it does.

Based on what we currently know, I think taking apple cider vinegar as a supplement is a good idea, whether you’re fasting or not.

To know if apple cider vinegar will “break” your fast, you need to know two things:

Like any vinegar, ACV is mostly water with a small amount of weak (acetic) acid.

But ACV is made from fermented apple juice (instead of grains or other fruits, for example).

1 tablespoon of ACV has about 3 calories, 0.1 grams of carbohydrate, and no protein or fat.

There’s not much food energy in ACV.

How Does Apple Cider Vinegar Affect Your Fasting Goals?

That depends on how long you’re fasting, and what your goals are.

Let’s define short-term fasting as anything less than 24 hours.

This includes what’s commonly called “intermittent” fasting, which is when someone eats all their daily meals in a relatively short period of time, like 10am-6pm (8 hours), for example.

This can also be called “time-restricted eating” (TRE), which I think is a somewhat more accurate (though less popular) term.

Let’s see how each of these goals would be affected by ACV during intermittent fasting.

(Note:  I prefer the term “fat loss” rather than “weight loss”, since fat is what we’re trying to lose.)

During any type of fasting–short or long–the body taps into its own fat stores for energy, since there’s no other energy coming in.

ACV has almost no food energy (3 cal / tbsp), so it won’t interfere much with fat loss.

When you fast, your blood sugar (glucose) level typically goes down since you’re not taking in any sugar or other carbs.

ACV contains a trivial amount of carbs (0.1g / tbsp), so it shouldn’t raise your blood sugar much at all.

Also keep in mind that vinegar may lower your blood sugar, as mentioned above.

Results:  My blood sugar right before drinking the ACV was 85 (mg/dL).  A half-hour later it was 86.  Another half-hour after that it was 81.

Notice my blood sugar never really went up, and was actually lowest at the end.

ACV and Intermittent Fasting for Ketosis

Ketones are the alternative energy source your body makes when you’re not eating carbs, like when you’re fasting (no carbs) or eating a ketogenic diet (low carb, high fat).

Time-restricted eating is one way to increase blood ketones to a higher level than you might get with a ketogenic diet alone.

The carbs (0.1g / tbsp) in ACV are extremely low, so they shouldn’t interfere much at all with ketone production in your body.

For example, a “strict” ketogenic diet can mean eating fewer than 20 grams of carbs per day.  Even if you drank a whole bottle of ACV (don’t do it!), you wouldn’t get close to 20 grams of carbs.

I also haven’t noticed any change in my ketone levels from drinking ACV during intermittent fasting.

If higher ketone levels is your goal, apple cider vinegar is definitely okay.

ACV and TRE for Bowel Rest

Time-restricted eating can be used for short-term bowel rest on a daily basis.

For example, if you eat all your food within 10 hours every day, that leaves about 14 hours (out of 24) for your stomach and intestines to “rest” (and hopefully rejuvenate).

Naturally, for your bowel to rest completely, you can’t eat or drink anything that requires digestion.

So if your intermittent fasting goal is bowel rest, apple cider vinegar is not ideal.

For the purposes of this article, let’s define extended fasting (aka “prolonged” fasting) as anything over 24 hours.

Just like before, whether apple cider vinegar “breaks” a long fast depends on your goals.

Common goals of prolonged fasting include all the ones mentioned previously (fat loss, blood sugar control, etc), and others like autophagy or “resetting” the immune system, for example.

Let’s see how these goals might be affected by ACV during an extended fast.

For example, when I drink bouillon (which has about 5 calories and 1 gram of carbs per serving, much more than ACV) during a long fast, it doesn’t seem to have any noticeable effect on my blood sugar or ketone levels.

And again, unlike bouillon, vinegar has been shown to improve blood sugar control.

If your goals are fat loss, blood sugar control, or higher ketones, drinking ACV during extended fasting is definitely okay.

Autophagy (which means “self-eating”) is a process in which your body starts recycling old, worn out proteins inside of your cells.

It’s like “spring cleaning” inside cells all over your body, and fasting is the greatest known stimulator of autophagy.

No research has been done to see if the tiny amounts of nutrients in apple cider vinegar (or similar supplements) interfere with autophagy.

All we can do is make our best guess.

That’s why if your goal is to activate autophagy during a prolonged fast, taking ACV may be okay, but it’s probably better to avoid it if you can.

ACV and Resetting the Immune System During Extended Fasting

Prolonged fasting for about 4 days or longer kind of “resets” the immune system.

In other words, a lot of old immune cells get broken down and recycled after several days of fasting, and regenerated from your stem cells when you start eating again.

This can be particularly beneficial for people with autoimmune disorders (when the immune system attacks a person’s own body by accident) like multiple sclerosis or Crohn’s disease, for example.

Just like with autophagy, there’s no research that tells us if the slight energy in apple cider vinegar would interfere with this process.

Until we know more, it’s probably better to avoid ACV (and other supplements) if your goal is to “reset” your immune system.

As with intermittent fasting, if you’re doing extended fasting for bowel rest, it doesn’t make sense to take ACV, or any other supplements that you don’t really need.

For most extended fasting benefits (including some others not mentioned in this article), taking apple cider vinegar is just fine.

If you’re doing a longer fast for autophagy, or to “reset” the immune system, use ACV sparingly and only if needed.

If your goal is bowel rest, use the least amount of supplements possible.

How Do You Use Apple Cider Vinegar for Fasting?

Now for a few specifics.

How Much ACV Should You Drink?

You’d have to drink a crazy amount of ACV to get any significant calories or carbs, so you almost can’t go wrong here.

If you decide to use apple cider vinegar while fasting, my suggestion would be to take 1-2 tbsp a couple times a day.

This is roughly the amount used in the beneficial vinegar studies mentioned above.

Make sure you dilute it and wash it down with plenty of water, as there are reports of the acid in ACV causing tooth erosion or damaging the esophagus. I also noticed it kind of burned my throat if I wasn’t careful.

When Should You Take Apple Cider Vinegar While Fasting?

That’s easy: It doesn’t really matter when you take it.

You may want to avoid drinking it right before bed, in case it causes some reflux or irritation when you lie down.

Otherwise, you might try a morning and evening dose.   But feel free to experiment and do whatever works best for you.

Based on research done with other types of vinegar, apple cider vinegar likely has various health benefits, including blood sugar control, fat loss, and increased satiety.

Some people like to take apple cider vinegar when fasting, but whether it breaks your fast depends on the type of fasting you’re doing and your specific fasting goals.

As with most other fasting “supplements” (like lemon water, black coffee, or stevia, for example), it’s probably worth taking it if the alternative is to end your fast early.

(Caveat: Sucralose (aka Splenda) and diet soda cause a lot of problems while fasting, so I don’t recommend using them.)

As you get more experienced with fasting, you may also find it easier to fast without “training wheels” like ACV.

So does apple cider vinegar break a fast?  Usually not, but always consider your specific fasting goals.