Does Alcohol Break a Fast? [The Full Story, Backed by Science] 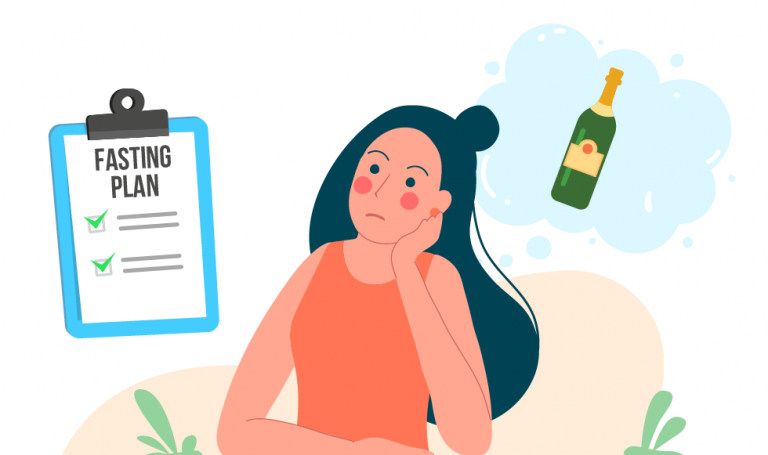 Alcohol is popular, and fasting is getting more popular….but do they go together? Or does alcohol “break” a fast?

Most alcoholic drinks have some type of sugar, which means they’re not ideal for fasting.

Alcoholic drinks without sugar are probably ok in very small quantities while fasting.

Contents show
1 Alcoholic Drinks – The Basics
1.1 Beer
1.2 Wine
1.3 Spirits or Hard Liquor
2 Alcohol and Intermittent Fasting
2.1 Can you Drink Alcohol while Intermittent Fasting?
3 Alcohol and Extended Fasting
3.1 Can You Drink Alcohol while Fasting for Multiple Days?
3.2 What are Some Other Things You Can Drink During a Prolonged Fast?
4 Breaking a Fast with Alcohol
4.1 Drinking Alcohol after a Water Fast
5 Fasting after Drinking Alcohol
6 Other Concerns with Alcohol
6.1 Alcohol Worsens Sleep
6.2 Alcohol Leads to Poor Decisions
6.3 Alcohol is Addictive
6.4 Alcohol is Bad for Long-Term Health
7 Conclusion

I’m definitely not an expert on alcoholic drinks. I don’t even drink myself.

But I did do some research…and I think at least most of what I say here will be accurate. 🙂

Let’s briefly discuss a few common alcoholic drinks so we can see how they fit in with fasting.

Beer is usually about 5% ABV (alcohol by volume), which means a 12-oz can of beer will have roughly 100 calories just from the alcohol.

Beer also contains maltose sugar, and about 10 to 15 grams of carbs per can, on average (though this varies by brand).

Historically, wine was usually about 10 to 15% ABV, but may be a little higher nowadays. That means a 5 oz glass of wine has roughly 100 calories from alcohol (about the same as a can of beer).

The amount of sugar in wine depends on the style of winemaking, including how much sugar is in the grapes when they’re picked, and how completely that sugar is allowed to ferment into alcohol.

Unfortunately, there’s no way to know exactly how much sugar (or even alcohol) is in your wine, because winemakers aren’t required to add a contents or ingredients label.

So, while estimates exist, you can’t know for sure unless you do special testing.

Spirits (aka hard liquor) are alcoholic drinks that have been distilled, and have an alcohol level of at least 20% ABV.

The alcohol level is usually higher than that. For example, vodka and tequila have about 45% ABV. That’s a lot of alcohol!

Intermittent fasting (also known as time-restricted eating) means eating all your food within a limited time each day, usually about 8 or 10 hours.

For example, if you only ate between 10 am and 6 pm, that would be an 8-hour eating window.

Since you won’t be eating during the other 16 hours of the day (out of 24), this gives your body more time to burn fat. It also helps normalize blood sugar and insulin levels in people with diabetes (or prediabetes), among other benefits.

Can you Drink Alcohol while Intermittent Fasting?

Recall for a moment that most alcoholic drinks contain sugar.

Basically, you shouldn’t consume sugar while you fast. So that rules out beer, most wine, and any mixed drinks that have added sugar (like margaritas, for example).

If you want to try something without sugar, like hard liquor (e.g. vodka or tequila), make sure you stick to really small quantities.

While vodka (or other spirits) shouldn’t have any sugar, they do have some calories. They also have other effects, like causing insulin resistance and promoting fat storage, that are not ideal while intermittent fasting

Alcohol also raises insulin levels when you do eat carbs (which in the case of intermittent fasting might be later in the same day).

That’s not great, since one of insulin’s main jobs is to store fat. Hence “beer bellies”.

Avoid any alcoholic drinks that have sugar (which is most of them) while you’re fasting.

If you want to drink pure alcohol (like hard liquor, or wine that’s verified to be sugar free), keep the amount of alcohol you consume to a minimum to avoid other harmful effects.

Let’s define extended fasting as anything over 24 hours.

Extended fasting has all the same health benefits as intermittent fasting, plus a few others to boot.

For example, when you fast for multiple days you may be able to stimulate a process called “autophagy” (which helps clean out your cells), or kind of “rebuild” your immune system (which lowers your chance of getting autoimmune conditions, like multiple sclerosis).

Can You Drink Alcohol while Fasting for Multiple Days?

For the most part, the answer is the same as it was for daily time-restricted eating (aka intermittent fasting).

It’s better to avoid any alcoholic drinks that contain sugar while you’re fasting (such as beer, most wines, and any mixed drinks with soda, juice, or other added sugar).

Sugar-free alcoholic drinks (like pure hard liquor, or certain wines that actually report their sugar content) may be okay in very small quantities.

For example, this guy drank a few glasses of very-low-sugar wine during a 3-day fast, and his ketones (the alternative energy source your brain uses while fasting) only dropped a little. They recovered the next day.

Keep in mind that you’ll probably be more sensitive to alcohol while fasting (or eating low carb), which means it may not take much to get intoxicated.

That’s another reason not to overdo it!

It’s also possible that even small amounts of alcohol may interfere with some of the “longevity” type benefits of prolonged fasting (such as autophagy, or “rebuilding” the immune system, as mentioned above).

Try to avoid any sugary alcoholic drinks during multi-day fasts.

Sugar-free alcoholic drinks are probably okay in very small quantities, but they may interfere with some of the health benefits you could get from extended fasting.

What are Some Other Things You Can Drink During a Prolonged Fast?

If you’re looking for other things to drink while fasting, besides alcohol, here are a few ideas.

Apple cider vinegar or lemon water are both reasonable, healthy supplements to use while fasting.

Black coffee also works well for a lot of people.

Drinking some bouillon or (low calorie) broth can help keep your salt levels up, which is beneficial during multi-day fasts.

As you can see, there are quite a few options!

The key is to pick things that are very low in carbs and overall calories, without having other harmful effects.

Breaking a Fast with Alcohol

Instead of wondering whether alcohol breaks a fast, what if you’re intentionally breaking your fast with alcohol? Is it okay to break a fast with some alcohol?

The short answer is yes, as long as you don’t overdo it.

It’s probably better to stick with the lower sugar / low carb varieties, so you don’t overwhelm your system right after a fast.

Again, you’ll probably be more sensitive to the alcohol after a fast, so take it slow!

Drinking Alcohol after a Water Fast

After a multi-day water fast, it’s better not to consume any sugar right away.

That’s because your body kind of “forgets” how to metabolize sugar during a prolonged fast (since it’s mainly using fat for energy).

At least for the first couple of meals after a long fast, try to avoid anything with sugar, including beer, most wines, and various mixed alcoholic drinks.

A sugar-free alcoholic drink is probably fine after a long fast, in small quantities (remember, you’ll be more sensitive to alcohol after fasting).

With a couple caveats, fasting after drinking alcohol is probably fine.

First, if your goal is to get past a hangover, fasting is generally ok. But make sure you hydrate and consume salt! Hangovers usually involve dehydration, and your salt level may become low from all the water in the beer etc.

Second, fasting tends to be easier if you eat low-carb beforehand.

So if your goal is to make life easy, don’t drink a bunch of sugary alcoholic beverages before you start your fast. 🙂

Other Concerns with Alcohol

Any article about alcohol would be incomplete without mentioning some of the other health concerns.

Maybe you already know about all this stuff, but just in case it’s helpful, here are a few reminders. 🙂

As Matthew Walker pointed out in his book, Why We Sleep, drinking alcohol in the evening is common, but it’s also a bad idea.

That’s because alcohol interferes with REM sleep and disrupts memory formation. It also causes periodic awakening during the night.

Walker acknowledges that it seems kind of “puritanical” to say this, but really the best advice is not to drink alcohol in the evening (or to keep it to extremely small amounts, if you do).

I’ve heard it joked that a lot of vegans eat meat when they’re drunk.

I have no idea if that’s true. Regardless, people do a lot of things after drinking alcohol that they wouldn’t do while sober. Naturally, that includes food choices.

Whatever goals you set for yourself in regard to fasting, if you overdo the alcohol it may be harder to follow through.

There’s no denying that alcohol is extremely addictive.

I work in the emergency room, and we treat alcohol addicts on a daily basis.

The most extreme version of this is people that literally just stumble around town looking for more alcohol to drink, while occasionally wandering into an ER (where we keep them safe until they sober up). Rinse and repeat.

If you don’t want to end up like those people, be mindful of how dependent you are on alcohol. 🙂

Just like with sugar, a lot of people may be more addicted to alcohol than they realize.

Alcohol is Bad for Long-Term Health

Alcohol is kind of glorified in our society, and involved in seemingly every social setting.

But the reality is alcohol causes many terrible diseases, including heart disease, cancer, and liver failure, to name a few. It’s the third leading cause of premature death in the US.

And then there are other issues, like domestic violence and drunk driving.

While it’s obviously possible to consume alcohol only in moderation, from what I can gather people in general aren’t particularly good at this.

That’s probably because alcohol is addictive, and leads to poor judgment.

As a medical provider, I see the horrible health consequences of alcohol abuse over and over again, and I can confidently say that for society at large, the harms of alcohol are much greater than the benefits.

I’ll get off my soapbox now. 🙂

Does alcohol break a fast?

Most alcoholic drinks have sugar, so they’re not ideal for fasting.

If you’re drinking some type of alcohol without sugar, it’s probably ok in very small quantities.

Too much alcohol (even with no sugar) still promotes fat storage and lowers ketone levels, so you don’t want to overdo it while you’re fasting.

Alcohol may also limit some of the “longevity” type benefits of extended fasting (such as autophagy), so if that’s what you’re shooting for you should probably avoid it.

Finally, drinking alcohol is not without (many) other health risks, so be careful out there. 🙂